The report “Enteric Disease Testing Market by Technology (Traditional and Rapid), End Use (Food (Meat, Poultry, Seafood, Dairy, Processed Foods, and Fruits & Vegetables) and Water), Pathogen Tested, and Region – Global Forecast to 2026″, The market for enteric disease testing is estimated at USD 1.8 billion in 2021; it is projected to grow at a CAGR of 6.0% to reach USD 2.4 billion by 2026. The increase in global food production impacts the food enteric disease testing market growth by increasing the number of food safety controls in each step from raw material procurement till the product reaches the consumers. Further, food manufacturers are willing to pay for testing and certification and have included this practice in their manufacturing cycles. With consumers becoming increasingly aware about the food and water-borne illnesses and stringent regulations to meet international standards, there is growing demand for enteric disease testing market. 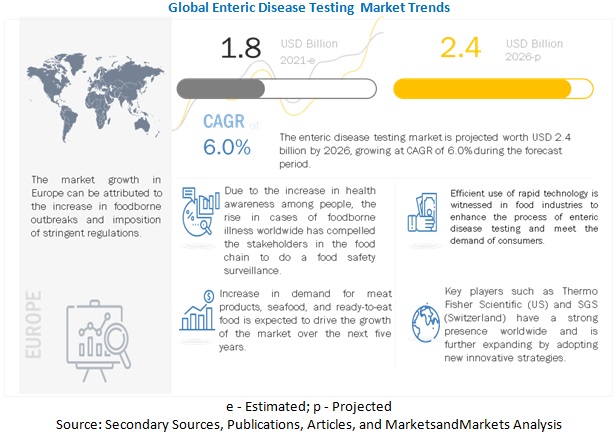 Salmonella pathogen is estimated to account for the largest market share in the by pathogen for enteric disease testing market.

Increasing instances of food contamination and foodborne poisoning are the major reasons for the growth of the enteric disease testing market. Pathogens such as Salmonella are highly occurring contaminants in cereals & grains and are also known as enteric bacteria often caused by birds or rodents during harvesting. Salmonella also causes contamination in meat, poultry, fruits, and vegetables. A several number of cases are found for diarrhea and cholera, resulting in several deaths caused by Salmonella infected food. These factors are paving way for growth of testing for Salmonella within the enteric disease testing market.

By technology, the rapid testing technology sub-segment is estimated to account for the fastest growth in the enteric disease testing market.

The rapid technology market has been proved as a driver for the enteric disease testing market owing to the attributes such as low turnaround time, higher accuracy, sensitivity, and ability to test a wide range of contaminants in comparison to traditional technology. Increasing food trade across borders, rising food consumption, changing lifestyles of consumers, and demand for convenience & processed food have led to the growing demand for enteric disease testing in countries around the world, especially in the booming markets of Europe.

The meat, poultry and seafood sub-segment by end use is estimated to account for the largest market share of enteric disease testing market over the forecast period.

The meat, poultry, and seafood segment is estimated to dominate the enteric disease testing market in 2021. Due to easy susceptibility to microbial and other contaminations along with the growing number of tests for meat, poultry, seafood products has resulted in the growth of the market. Stringent government policies & regulations for meat, poultry, and seafood products and assurance of safe meat to consumers have led to consistent enteric disease testing with checkpoints at different stages to eliminate any incidences of meat contamination.

Europe is projected to be the fastest-growing market for the forecast period.

The market in this region is primarily driven by growth in the German and UK markets. It is also driven by European food policies that have been extensively emphasized by the National Reference Laboratories (NRLs) and the European Reference Laboratories (EURLs) to maintain food standards and protect consumer health. Campylobacter has been the most commonly reported food outbreak, with an increase in confirmed human cases in the European Union (EU). The market is further fueled by the presence of major enteric disease testing companies such as SGS SA (Switzerland), Eurofins Scientific (Luxembourg), and Intertek Group plc (UK), which are continuously investing and collaborating for the development of better and faster testing technologies to aid conformity to various enteric disease regulations.

Hitesh ShahBusinessMay 30, 2022
The worldwide Chemical Detector Market report delivered by Report and Data is a gathering of the inside and out investigations …
END_OF_DOCUMENT_TOKEN_TO_BE_REPLACED

How Industrial Automation Can Bring Immense Growth In Bulk Production?

Steven GlassnerBusinessDecember 14, 2022
Imagine if you could increase your production by 50% or even 100%. That’s the potential that industrial automation has to …
END_OF_DOCUMENT_TOKEN_TO_BE_REPLACED