The report “Pesticide Inert Ingredients Market by Type (Emulsifiers, Solvents, and Carriers), Source (Synthetic and Bio-based), Form (Dry and Liquid), Pesticide Type (Herbicides, Insecticides, Fungicides, and Rodenticides), and Region – Global Forecast to 2023″, The pesticide inert ingredients market is projected to reach USD 4.7 billion by 2023, from USD 3.5 billion in 2018, at a CAGR of 6.14% during the forecast period. The market is driven by factors such as the increasing demand for specific inert ingredients in pesticide formulation and capability of inert ingredients to improve the efficacy of pesticide application. 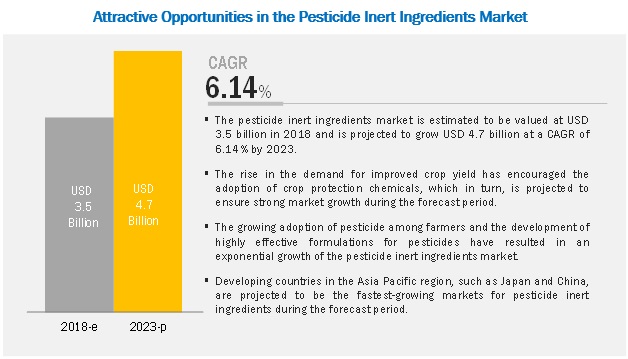 Pesticide inert ingredients for the herbicide segment is estimated to have the highest share during the forecast period.

High adoption of inert ingredients in the North American region also drives the overall pesticide inert ingredients market. The major use of the formulation of herbicides is in the form of emulsifiers and solvents.

The dry segment in terms of forms of pesticide inert ingredients is projected to witness the fastest growth during the forecast period.

The Asia Pacific is projected to witness the fastest growth in the inert ingredients market through 2023.

Agriculture is one of the largest industries in the Asia Pacific region, with a large share of farmland and good soil fertility. Moreover, the region is rich in plant diversity due to the wide variations in climate across countries. Even though there is a variation in the agriculture system from basic systems in India to the technically advanced ones in Japan, the agenda of food security is supported by local governments in the Asian countries. The Asia Pacific region is one of the leading consumers of pesticides across the globe, though the region mainly depends on imports of pesticide supply. Since inert ingredients are majorly consumed by pesticide manufacturers at the production facility during the formulation stage, and since countries such as India, Thailand, and Vietnam depend on imports for formulations, the market for inert ingredients is projected to be smaller compared to the Americas and Europe. However, with the increasing establishment of production plants in the Asian countries, the use of inert ingredients along with pesticide application is projected to increase in the future.

This report includes a study of development strategies for leading companies. The scope of this report includes a detailed study of major companies such as BASF (Germany), Clariant (Switzerland), DowDuPont (US), Stepan Company (US), and Croda International Plc. (UK). Other players in the market include Eastman Chemicals (US), Solvay S.A. (Belgium), Evonik (Germany), Huntsman Corporation (US), AkzoNobel (The Netherlands), Royal Dutch Shell (The Netherlands), and LyondellBasell Industries (Netherlands).

Absolute NewsBusinessApril 27, 2022
This Sweat Sensors Market research report contains a complete background analysis of the industry, which includes an assessment of the …
END_OF_DOCUMENT_TOKEN_TO_BE_REPLACED