Rodenticides Market to Showcase Continued Growth in the Coming Years

The report “Rodenticides Market by Type (Anticoagulants, Non-Coagulants), Mode of Application (Pellets, Spray, and Powder), End Use (Agriculture, Warehouses, and Urban Centers), Rodent Types (Rats, Mice, Chipmunks, Hamsters) & Region – Global Forecast to 2027″ The global rodenticides market is estimated to be valued at USD 5.3 billion in 2022. It is projected to reach USD  7.1 billion by 2027, recording a CAGR of 5.8% during the forecast period. The rodenticides market is driven by rapid urbanization across regions. The increase in awareness on public hygiene, the prevention of vector-borne diseases, and the rise in purchasing power parity (PPP) among the middle-class population are factors that have encouraged the demand for pest control services, globally. In addition, government initiatives for maintaining environmental hygiene are projected to drive the demand for rodenticides. For instance, the “clean-up” movement in India has proven to be a major driver for the insect pest control industry. 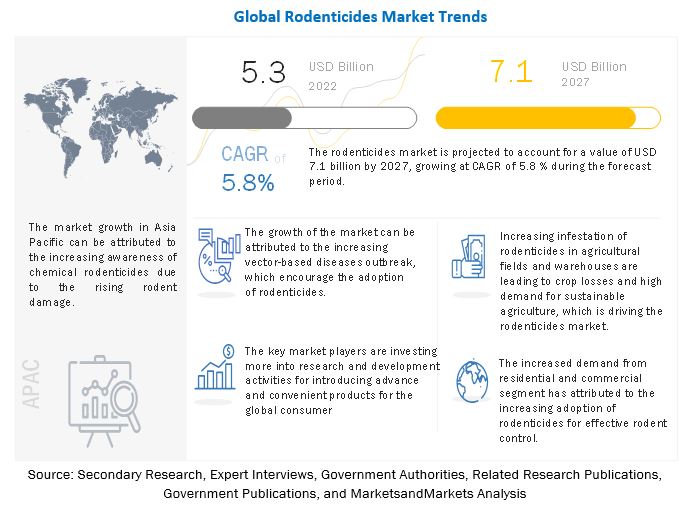 The major factor restraining the growth of the rodent control market is the absence of uniform guidelines for testing across regions. The absence of systematic rules and protocols for the approval of rodent control (due to varying regulations across different countries) and the overlapping of these regulations with those of crop protection pesticides often result in delayed product approvals; this hampers the growth of the market. The lengthy approval procedures for the registration of an active ingredient and the growing resistance against chemical insecticides among insects also pose challenges to the market growth.

Rapid Urbanization across the region

Urban areas are more susceptible to pests. In addition, a rapid increase in urbanization and industrialization is one of the major factors encouraging the demand for pest control. The shift in residences of people and their migration from rural to urban areas would contribute to the increase in the urban population. According to FAOSTAT 2018, an increase was observed in the urban population by 8% during the study period from 2015 to 2018. According to the United Nations Department of Economic and Social Affairs 2018, a significant portion of the population in North America (82%), followed by Latin America and the Caribbean regions (81%), Europe (74%), Oceania (68%), Asia (50%), and Africa (43%) is living in urban areas.

The shift of the rural population for more growth opportunities in cities has increased the burden on urban cities. These megacities have now become incubators for new epidemics and zoonotic diseases that could spread more rapidly and become a worldwide threat. Poor housing facilities arising due to increased urbanization can lead to the proliferation of insect and rodent vector diseases and geohelminthiases. This is due to inadequate water supplies as well as sanitation and waste management. These factors contribute to a favorable environment for both different rodents and insects, which carry pathogens and soil-transmitted helminth infections. For example, in Chinese cities, the incidence of Seoul hantavirus hemorrhagic fever with the renal syndrome has been linked to urban growth, an increase in the rat population, and the rise in rat-human contact.

Rapid urbanization is impacting commercial, residential, and agricultural areas significantly. The increase in urbanization has led to changes in consumer lifestyles. With the increase in workload, busy lifestyles, and the rise in the number of working women, the time to keep the working space pest-free is reduced. This has led to a surge in demand for products that offer proper pest management solutions. Rodents, such as rats. are most commonly found in kitchens due to the presence of food and food-related garbage. The increase in health and hygienic concerns of the people and the affordability of pest control practices encourage them to adopt such practices for a rodent-free environment.

Increase in the global trade of rodenticides

Asia Pacific is expected to be the fastest-growing region with a CAGR of 6.5% during the forecast period.

The Asia Pacific market is completely driven by the country markets of China, India, Japan, Australia, Thailand, Indonesia and few other Asian counties. As the world’s largest and most populous region, Asia Pacific is one of the key markets for rodenticides. Rodents are common pests present in agricultural fields. Annually, extensive volumes of agricultural produce are destroyed and contaminated by rodents. To meet the increase in demand for food products and to reduce the crop damages caused by rodents, the use of rodenticides has increased significantly in the region. The food retail, food manufacturing, pharmaceutical, hospitality, and residential sectors are expected to be major growth verticals in this market.Asia Pacific is expected to be the fastest-growing region during the forecast period due to several reasons. One of the major drivers of the market is the fact that agriculture is one of the most significant revenue-generating sectors in China and India. The growing population within the region is urging the farmers to provide a maximum yield to fulfill the demand of the increasing population. In such cases, the increasing crop damage and decreasing food production due to rodents are expected to leverage this market positively.

Eric MartinAviationAugust 10, 2022
According to the Market Statsville Group (MSG), the global ELearning Authoring Tools Software Market size is expected to grow at a CAGR of …
END_OF_DOCUMENT_TOKEN_TO_BE_REPLACED

Kavita SharmaBusinessMarch 23, 2022
The “Global Electric Vehicle (EV) Charging Station Market Analysis To 2030″ is a specialized and in-depth study of the industry …
END_OF_DOCUMENT_TOKEN_TO_BE_REPLACED

Rahul NikadeBusinessJanuary 24, 2023
Cruise Industry Overview The global cruise market size was valued at USD 7.25 billion in 2021 and is expected to …
END_OF_DOCUMENT_TOKEN_TO_BE_REPLACED